High 180 on the decent from Kings Canyon National Park

From the Southern end of the Sierra Nevada range, through Sequoia and Kings Canyon National parks, around the lower foothills of Pine Flat lake then ending at one of the more popular recreation areas in the central Sierras: Bass Lake. This section has some great roads to ride and places to see.

This section begins in the dry desert-like Lake Isabella area, soon giving way to pine-covered hills that look more like Southern California then the Sierra’s along the Western Divide Highway, then dropping down to one of it’s lowest points in California, at only 467’ along highway 198, just before we go back up into the foothills and into Sequoia National Park along our first 5-star road on the trip. The forests here are thicker and you’re now traveling among the largest trees in the world, the Giant Sequoias.

After traversing along the General’s Highway to Kings Canyon National Park at Grant Grove, we then drop down into the foothills once again, traveling around the north shore of Pine Flat Lake, turning north again to climb into the pines as we arrive at Bass Lake.

Lodging and camping are plentiful along this section, but gas can be a little scarce, especially through the parks, but never is really a problem as long as you fill up before you head up into the hills. 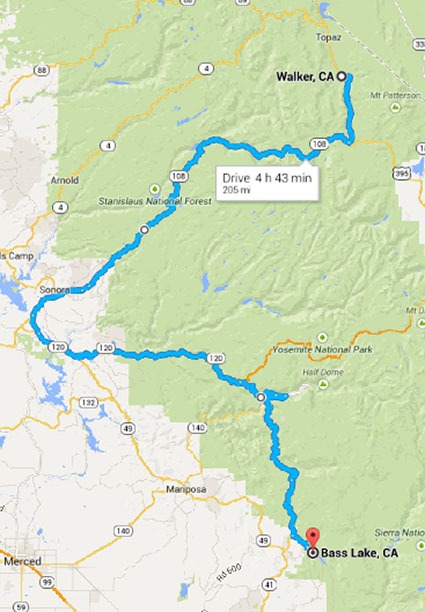